Titan Lives Up To Its Name

Home/News/Titan Lives Up To Its Name 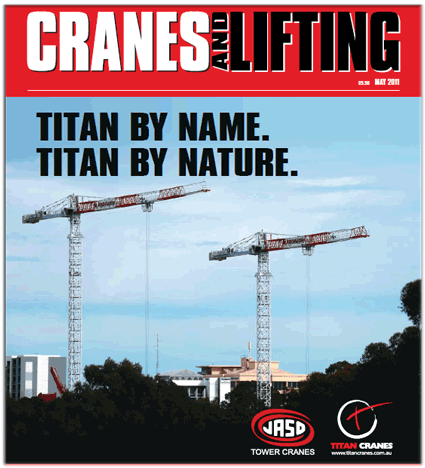 Titan Cranes has been a supplier and hirer of Jaso tower cranes for some time, but its most recent placements indicate that the word “titan” is appropriate to describe the company’s latest machines.

The Adelaide cranes have been erected with a freestanding height of 68 metres and 58m and a 72m and 68.5m jib, while the Canberra crane has a freestanding height of 72m and jib length of 68.5m. Both the Adelaide and Canberra jobs are architecturally complex: the two cranes cover the site in Adelaide while in Canberra the choice of the Jaso avoided the need to employ a second tower crane on the site for heavy lifting operations. The crane can comfortably handle the 12 tonne precast panels and heavy steel girders of up to 19.8t that are the largest components of the project. The lack of ties to the building and compact tower size of the J600-24t is also a benefit for the builders on these projects.

The J600-24t replaces the Jaso J600-20t Series I and has a strong load chart, lifting 4.1t at its maximum radius of 85m. Maximum capacity is 48t using a shortened jib and 24t with the full jib in place. The crane’s free-standing height of 98m is a key factor in gaining work, while the semi flattop design means the crane is both easy to erect and stable in operation. The ease of erection is assisted by Jaso’s attention to containing the maximum weight of components.

Titan managing director Damon Hanlin believes the J600-24t is the largest electric tower crane currently operating in Australia, and says the quality of the Jaso offerings places them on a par with other well known European manufacturers, while their competitive pricing makes them the best value for money tower crane on the market. 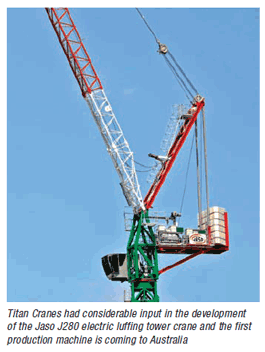 Titan will soon take delivery of the first production Jaso J420 tower crane, which fits between the J600 and J300 and follows the same semi-flat top design. This machine was unveiled at the recently concluded SMOPyC construction equipment exhibition in Zaragoza (Spain) and is now on its way to Australia.

It features a maximum 80m freestanding tower height, the latest variable speed electric drives on all functions, super high winch speeds and secondary brakes on both luff and hoist mechanisms. Pin connectors on the tower sections and a maximum component weight of 6t make this an easy crane to erect and recover.

The J280-18t lifts 3t at its maximum 60m radius and will lift a maximum 24t specially configured and 18t as standard. Maximum line pull (single line) is 9t. A unique internal climbing system can be employed, and its compact dimensions allow it to fit into tight lift shafts.